As you know, for nearly 35 years the Plantain has worked very hard to bring you honest, up-to-date news about life in Miami, Broward, Palm Beach, and Duluth. We used to also serve the community of Vero Beach but stopped in 2008 after an incident that I think needs no further explanation or commentary. It is with this long history in mind and with great sadness in my heart that I inform you that the Plantain’s annual coverage of the South Beach Food and Wine Festival has been canceled because it now costs $60 to park on the Beach and $125 to eat some watery ceviche from a plastic cup while Guy Fieri stands around awkwardly waiting to be recognized.

And it’s not that we at the Plantain don’t like to spend money on things that are fun. I recently bought some insulin and am very much considering paying rent eventually. But for the promoters to hawk some undercooked fancy-ass burgers with truffle bullshit on it for $250 when I can literally buy the most delicious cheeseburger in the world for like $6 at 5 Guys is unconscionable. Plus, at 5 Guys I rarely have to witness Guy Fieri, a man who looks like what would result if Fred Durst and a Mango had a baby that went to college at a Jimmy Buffet concert, whisper fight with his wife in a corner while fans wait for autographs. “Don’t do this right now!” he sternly shouts before wrapping his arm around an old man who thinks he is Smash Mouth.

The Plantain reached out to the Festivals promoters and asked them for complimentary tickets and a parking pass, but was told that the Plantain was not welcome because we are “fake news.” While that is technically true, it is still very hurtful.

So in conclusion and in summation, the Plantain will not be able to report on the South Beach Food and Wine Festival, or the staggering amount of times Guy Fieri awkwardly throws his hands behind his back in an attempt to catch the Oakleys he has on backward from falling to the sand. 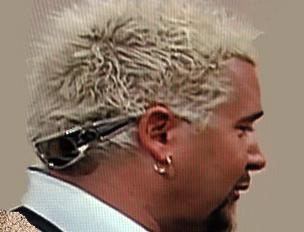 The Rhythm Finally Got Her: Gloria Estefan Diagnosed With Stage-4 Conga

Veteran Traffic Cop Blows Minds After Issuing First Legitimate Traffic Citation: “I Can Do That…?”